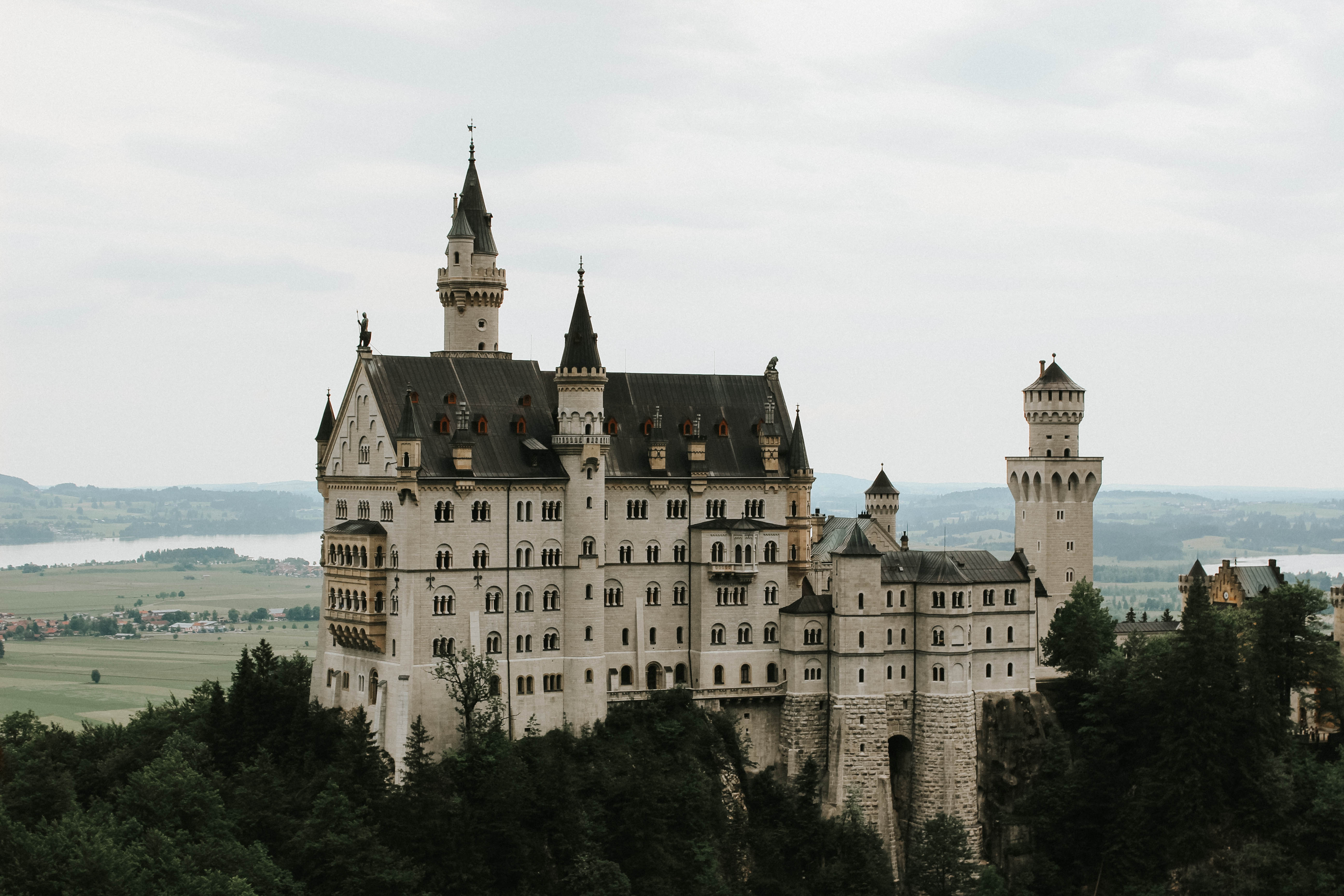 18 May The Neuschwanstein Castle was Built by a Crazy King, Copied by Disney, and is Still Standing Today

Posted at 22:14h in Destinations, Europe, Germany by Adventuring with Shannon 1 Comment

If you like crazy stories and insanely beautiful castles, then this one article you don’t want to skip. The Neuschwanstein Castle is one of my all-time favorite places to visit AND favorite stories in history. Located in the heart of the Bavarian Alps, this beautiful castle has everything you could imagine wanting in a castle. Though unfinished on the interior, the breathtaking beauty of the location and the castle itself make it something you can’t miss on your trip to Bavaria! However, it has a sorted history of insanity and potential murder.

Though the Neuschwanstein Castle appears as if it was built during medieval times, it was actually built in the late 1800s by King Ludwig the Second. The story that the Germany government likes to tell is that Ludwig commissioned it in honor of a friend. However, when doing more research on the castle itself, it was actually commissioned due to Ludwig’s obsession with fairy tales.

This dude became SO obsessed with fairy tales and castles that he spent insane amounts of money on this castle. The German government at the time was incredibly unhappy with the amount of time and money he was spending on this castle and began to claim that he was insane. King Ludwig heavily avoided the government, kept secret the fact that he was a homosexual, and almost married his cousin (a female) before breaking off the engagement claiming that “her father” split them up.

The Castle to Overlook the Building of His Castle

He spent millions of dollars building the Neuschwanstein Castle to look like exactly what he thought a perfect castle would look like. King Ludwig II even moved away from Munich to his childhood home the Hohenschwangau Castle so that he could literally watch the building of his precious castle from his bedroom window.

Later, he also built the castle below as a “summer home” from which he could view the building of his baby.

The rest of the German government was embarrassed by the king and found his fairy tale obsession to be a waste of money for the kingdom. Basically, the German government could not stand this King because they found his lack of government business and effectiveness annoying and were convinced that he was completely insane. They assigned a doctor to him to treat Ludwig’s “insanity.” One night, the doctor and Ludwig went for a walk. The doctor had told Ludwig’s attendant not to come along, and neither man returned from that walk.

Ludwig was found dead in the water, but with no water in his lungs. YET THE GOVERNMENT RULED HIS DEATH A SUICIDE BY DROWNING. You can’t drown if there is no water in your lungs. The doctor had blows to the head and appeared to be strangled in what looked like a fight (Clearly fighting with the king). The government never spoke of the doctor’s death.

Some say he poisoned the king.

The government rejoiced over their dead king and Ludwig’s brother immediately took the throne. Building on the Neuschwanstein Castle was stopped immediately, leaving multiple interior floors unfinished to this day, and government affairs continued as usual.

This is seriously one of my all-time favorite stories in history. The king just wanted his fairy tale. The government ruins everything.

The castle is now open to over 1 million visitors each year. You can tour the outside of the castle, hike to better views of it, and listen to tours in many different languages. The interior remains unfinished, but what is finished is incredible to see.

Disney actually saw this castle and used it for the inspiration of one of their popular fairy tale movies: Sleeping Beauty. Sleeping Beauty’s castle is based on the design of the Neuschwanstein. King Ludwig even inspired Disney with his fairy-tale design.

Things To Do at the Neuschwanstein Castle

How to Get to the Neuschwanstein Castle

The best way to get to the Castle is to take the train from Munich. Make sure that you take the express train though! We accidentally took the local trains which took us about 3 hours to get there. Don’t get me wrong, we saw a lot of really cute German towns, but it was a long journey.

Did you know I actually planned my entire Iceland