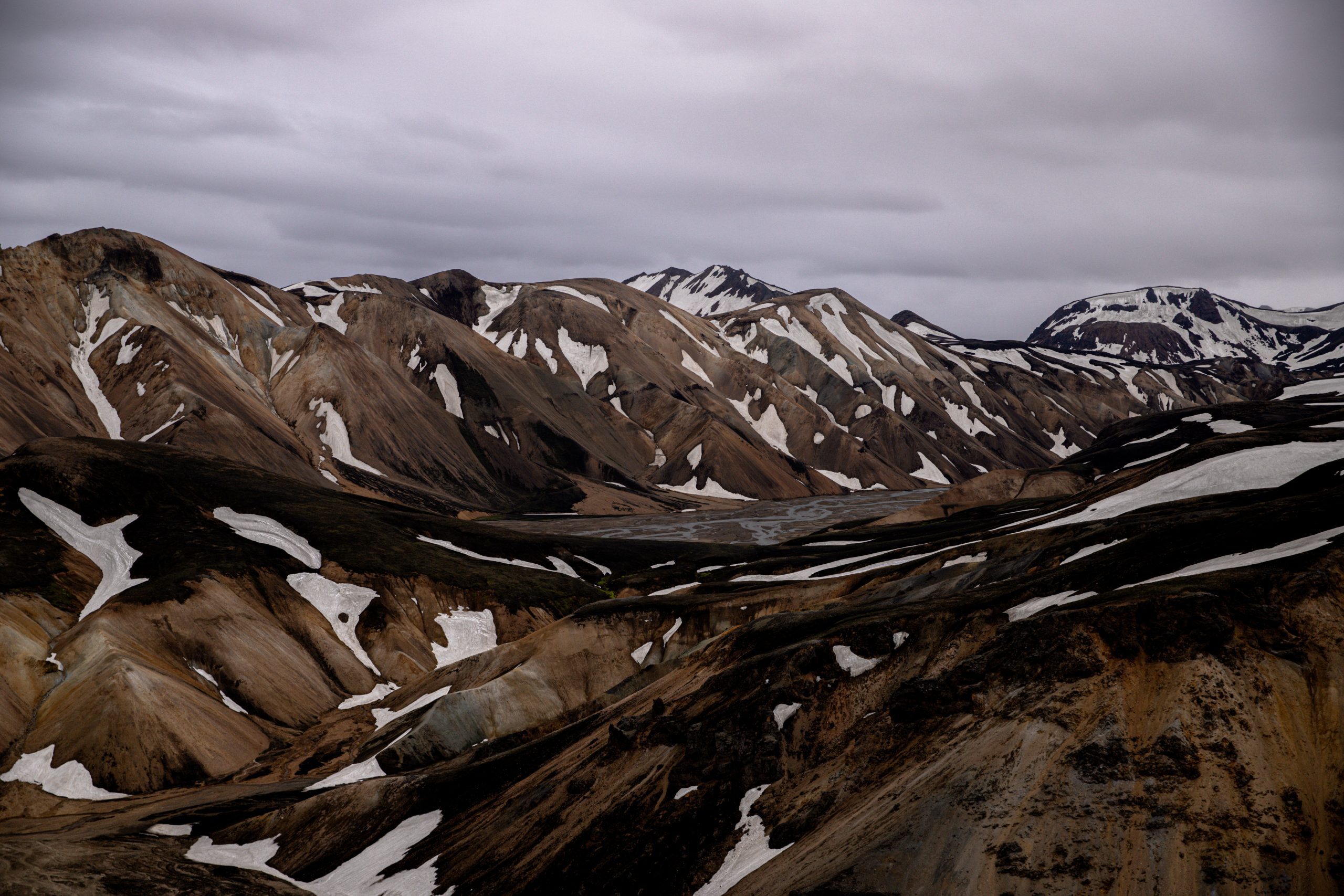 Posted at 12:03h in Adventure, Destinations, Iceland by Adventuring with Shannon 6 Comments

This is a story that I honestly don’t enjoy telling. While it was definitely an adventure, it is not something that I am proud of. Having to get rescued by an Icelandic emergency rescue team on my first day of the Laugavegur Trail is something I consider a failure rather than a success. However, this is the totally true account of how I slid 500ft down the side of a mountain and survived. I hope that this can help some hikers make better decisions than I did, and also hopefully give some good safety tips to those who (hopefully not) may experience a dangerous slide in the future.

TLDR: I survived with minor injuries, a newfound caution of heights, and a lot of luck.

Hiking the Laugavegur Trail in Iceland

I have been dreaming of hiking the Laugavegur Trail in Iceland for years, and I finally was getting the chance to do it. This 55km trek goes through the Icelandic highlands, through old volcano fields, over mountains, and around glaciers. There is truly nothing like it. It is commonly thought of as one of the most beautiful treks in the entire world. The plan was to combine it with the difficult 15 mile day hike: the Fimmvörðuháls trail from Thorsmork (where the Laugavegur Trail ends) to Skogar.

After spending months planning and training for these hikes, we were finally ready to complete this hike. As someone who got taken off the 56 mile Foothills Trail last year due to a severe plantar fasciitis flare up, I had spent a long time healing my feet and preparing for this journey. For once, I wasn’t worried about my feet taking me off the trail. I had done everything possible to prepare, and I was determined to finish it.

But that’s not what happened.

How the Day Started

Eric and I have talked about this day a million times. We have gone over in our minds every little decision and mistake that led to putting us in a life-threatening situation, and let me tell you, there were a lot of them.

As it turns out, the reason we saw so many people going up this path was because it was a famous day hike to this beautiful mountain top. We were glad when we reached the peak that we had taken that route because of the amazing views. However, we quickly realized that we had spent all of this time ascending, but we took the trail that was going to make us descend all of the way back into the valley. That idea sucked because we basically wasted the afternoon ascending for now reason.

BUT we saw ANOTHER trail split that offered less of a descent and supposedly connected up ahead with the Laugavegur Trail. Of course this seemed like the better option, we could see the path, and our GPS showed it to be a real route. So we split off the main trail, and went on the road less traveled by.

It is important to note that the Laugavegur Trail has a VERY short hiking season due to snow and ice. It usually opens late June-early July, and we were hiking the first week of July. This meant that winter had just faded away and the trails hadn’t totally been combed over to see how winter had affected them. As we got further along this trail, it was clear that recent erosion had taken place. Winter and spring had taken their toll on this section of the trail as the path became thinner and side of the mountain became closer due to this erosion. We knew now that this path was unsafe, and it was time to turn around and backtrack to a different path.

Just as we were decided to turn around, the ground eroded under both Eric and I and we slipped. We both slid about 10 feet on our stomachs as we jammed our poles into the earth to try and stop ourselves. Eric was able to get his poles into the earth quickly and climb back up. I was not.

When Eric reached the top he tried to reach his pole down to me to pull me back up, but there was no way he could reach me without falling again himself, and if he fell from the angle he would have had to lean to pull me up, he would have fallen face first and tumbled down the mountain potentially breaking his neck or worse. It wasn’t an option.

The ground eroded again under me and I fell uncontrollably. This was the scariest part of it all. I was sliding on my stomach unable to stop, not knowing how far I was going to fall and if I would be able to stop at all. I slid somewhere around 75ft down the side of the mountain before I could jam my poles into the earth to stop myself. I was able to slowly turn around onto my pack and lean against my backpack and the poles to hold myself in place. I held myself in that spot basically using my arms and my poles to keep me from falling the rest of the way for around 45 minutes as I watched rocks fall beside me and the the ground erode nearby.

The Safety Gear that I Will NEVER Hike Without

During that time Eric used our Garmin InReach Mini (highly recommend hiking with one) to send out an SOS call because I was very stuck. I couldn’t climb up because the ground was basically a landslide waiting to happen, and I couldn’t move from my spot because I would slide down the rest of the way at speeds that could put me in serious danger. Basically, I was in a lot of danger.

Quick Plug for the device that rescued me: This device is AMAZING. This was ironically our first hike using it. It sent GPS points to my family back home and we could send pre-set messages for free like “We’re done hiking for the night” or “We don’t have cell phone service, but we are doing well” to those back home who were following our hike. Also, the plan that we were on comes with FREE emergency services. Eric hit the SOS button and the Garmin people immediately reached out to him and the Icelandic Emergency Services. While I was hanging on the side of the mountain, Eric was in constant contact with the Garmin people and the Garmin people were in contact with my parents back home since they were set as my emergency contact. This device also showed us maps and altitudes and a lot of other cool things. After using it, I will never hike without it. PLUS it only weighs 3.5oz for those of you ultra-light hikers. Ok plug over and back to my story. You can buy it here* or at REI.

Eventually I could feel the ground under me giving way, and I knew I was going to fall. I had no other options but to do my best to descend safely.

Here’s some of the things I planned as I was hanging there that helped me stay safe:

I finally slipped out of my stronghold and began to slide.

I managed to use my poles every so often to jam into the ground and slow me down or stop me. At this time Eric had walked away from where he could see me because he had contacted other hikers who were calling to tell the rescue team the exact path we were on. I was lucky (basically a miracle) to be able to find strongholds for my poles as I slid. I would jam a hiking pole into the ground and it would yank me back from falling more.

I broke one of my carbon fiber hiking poles completely in half because of how fast I was sliding, but I walked away with only soreness, a decent case of road-rash, a pulled muscle in my back, and some muscle strain in my arms from holding me up. If I didn’t have the trekking poles, it would have been bad and not at all the same happy ending.

I’ll admit, it was terrifying. I don’t have a fear of heights and I love a good adrenaline rush, but this day had me praying like never before. It’s rare that I’m scared, but I was definitely scared.

The Garmin reached the SOS team and they came looking for us, and Eric made a flag out of an emergency blanket so they could spot us from far away (Brilliant really). I was stuck at the bottom of this canyon that was completely off trail.

The Icelandic emergency search and rescue team were like a well oiled machine, they found a different, snow -covered path, down the mountain to come get me. They kicked holes about a foot deep into the snow to create stairs for me and them to climb back up to where Eric was.

The search and rescue team got me to safety where I was finally reunited with Eric, but our hike was over at that point. I was super sad to not be able to complete this hike that I dreamed about for so long and spent so long preparing for, but I am greatly for the miracle of walking away with no major injury.

Definitely a crazy adventure that I do not want to repeat.

How this will affect our Future Hikes

Anyway, thanks for reading. If you have a cool story from hiking or adventuring, comment below. I’d love to hear it!

**Affiliate links may be used: If you purchase through my links, I will receive a small commission. Your support purchases through my links allow me to follow my dreams!***

Astrophotography is one of my favorite things to d